The Maine Lakes & Mountains region is an undeservedly poor cousin to the Maine coastline regions, and seems to get far less press than New Hampshire’s lakes and White Mountains. A 2020 study by the Maine Office of Tourism found that 67% of visitors came from the New England state, 33% from Maine alone. Might this be a well kept secret? Maybe. But one thing is sure: Its deep glacial lakes, fir swept peaks and rambling rivers are one of New Englanders’ beloved playgrounds, a draw in all seasons.

As the region name implies, the region is full of lakes, the major draws being Sebago Lake to the south, the second largest in the state, and Rangeley Lake to the north. But there are hundreds more, from large bodies like the fabulously named Mooselookmeguntic near Rangeley, to Sebago’s popular cousin Long Lake to the south. All that water also implies rivers, and there are plenty of those, as well.

The king of these is the Androscoggin, which after flowing south for a bit from its headlands in the far northwest of the region, crosses the border into New Hampshire, and after wondering where it’s got to, makes a wide loop back across the border and heads toward the region’s eastern border, before veering off towards the Atlantic ocean. In the process, it drops over 1,200 vertical feet, and yes, that means waterfalls and rapids.

As for mountains, the Appalachian Mountains charge right through the region with 4,000 foot peaks, slashing their way through western and northern Maine on the way to their ultimate terminus in Newfoundland. Spruce, pine and Maine’s famous balsam fir blanket the mountains in deep green year round, while its maple, beech and birch fire up the slopes in fall with brilliant foliage. 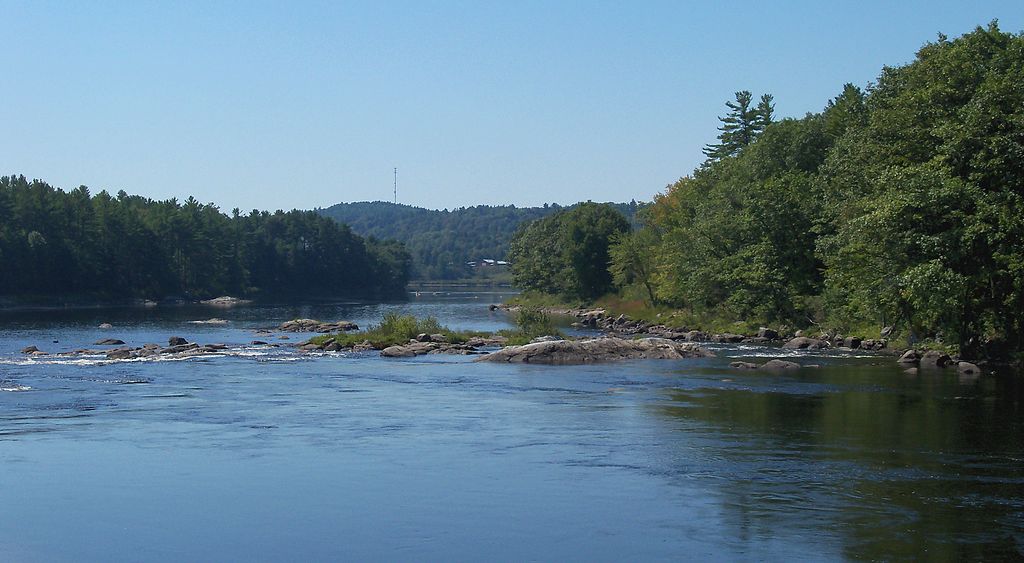 As beautiful and wild as the region seems, it would be wrong to think it’s untouched. With its abundant fish and rushing waters, the Androscoggin early on became a magnet for commercial fisheries and mills and mill dams, and its tall, straight trees drew loggers. Later on, in the early 20th century, paper mills were built along the banks, proceeding to dump their toxic waste into the waters. By the 1960s, the river was one of the most polluted in the country. But this has a good ending! We can thank our lucky stars, and the efforts of U.S. Senator Edmund Muskie, who grew up in the area of Rumford, one of the major paper mill towns, for the passage of the 1972 Clean Water Act. It was a long road since then, but the river is now clean, welcoming anglers, kayakers and swimmers to its waters. Logging is also better controlled and mostly out of sight of visitors, and the region’s stewards are ensuring that these mountains and waterways remain precious natural assets for all visitors to enjoy.

Here’s what you’ll want to experience in the Lakes & Mountains region, including “events not to miss”, those longstanding, beloved events for this region. Of course, in any given year, there are a multitude of events taking place. To find these, simply Google “events near <place>” or “events near me”, which will return an astonishingly comprehensive list of events. There are also apps you can download, like EventBrite. And it’s worth checking the Maine Tourism site. On the trail and on the water are the mantras for the warm season. Spend it swimming, boating, tubing, rafting, fishing or simply gazing at the abundant water and mountain vistas. Get on your feet for anything from an easy stroll to a rigorous climb on the abundant trails. Drive along one of the several scenic byways. Explore one of the sweet little towns like Rangeley, Bethel, Fryeburg and Bridgton.

Following the 4th, head to Hiram for the Ossipee Valley Fair, a relatively young agricultural fair for Maine, launched in 1980. Nevertheless, it has everything you could want in a fair – all the livestock exhibitions, contests, activities, crafts, food,  entertainment, midway, parade and fireworks. This is no slouch.

The second weekend of July brings the Moxie Festival in Lisbon. Celebrating that uniquely Maine beverage since 1982, this is no slouch of  festival – you’ll find music, shows, contests, a parade, fireworks, food and beverages. And of course, everything moxie, including a recipe contest.

As August rolls in, so does the Wilton Blueberry Festival, celebrated the first weekend of August since 1982. You’ll find the usual vendors, a craft fair,  live music, parade, fireworks, and more.

Also in August is the Great Falls Balloon Festival in Lewiston, first launched in 1992. Who can resist the bright colors of these behemoth balloons as they waft along high above the landscape? And yes, you can also book a ride. After you’ve had your fill, drift on over to the food and craft vendors and watch the parade. Fall is about the leaves, of course. But remember that the further north you go, the more pine and fir you’ll find, and less deciduous. That said, there’s something about color against the deep evergreen that will make your heart sing. Beyond that, continue your summer activities, except, of course, those that immerse you in the water. A bit cold now for that.

The Fryeburg Fair, held in early October, has been going strong since 1851, and is the largest in Maine, and second largest in New England. A classic agricultural fair, you’ll enjoy all manner of livestock, events like tractor pulls and pig scrambles, exhibitions, parade, midway and of course, lots of food. Change it all up for winter. This is the season for alpine skiing at one of the several ski resorts like Sugar Loaf and Sunday River. Strap on your cross-country skis or snow shoes to trek through the abundant trails throughout the region. Hop on a skimobile or go skating on a frozen pond. Curl up inside with a good book and a cup of hot cocoa. Who said winter wasn’t fun?

January brings the Snodeo in Rangeley, going strong since 1983, with its snowmobile stunts and races, food, parties, parade and fireworks.

Ok, yes, mud season. But what about skiing on a warm day in a t-shirt when the snow is still on the ground? And brave the mud to trek to the waterfalls – they are in their glory now.

For that last bit of skiing of the year along with some great music, check out Sugarloaf’s Reggae Festival, started in 1988, or Sunday River’s Spring Fest Weekend.

Rangeley Lake from Town Park near sunset
Rangeley Lake at sunset
Doc Grant's claim to fame in Rangeley ME
Smalls Falls near Rangeley ME
The old jail in Phillips ME still stands
Daggett Rock in Phillips ME, a glacial erratic
Flagstaff Lake from Eustis ME
Tiny shop at Bigelow Fields bison farm in Langtown Mill ME
View from Height of the Land in Roxbury ME
Mooselookmeguntic Lake from Height of the Land in Roxbury ME
Coos Canyon in Byron ME
A picturesque spot south of Andover ME
Picturesque Waterford ME
Summer fun at the Causeway in Naples ME
Cascade Stream Gorge near Rangeley