Sandwiched between the tourism meccas of Boston and Cape Cod, the “South of Boston” region encompasses two shorelines (“South Shore” and “South Coast”), separated by Cape Cod, along with a plethora of inland towns stretching to the Rhode Island border and a smidgen of the Connecticut border.

The South Shore stretches roughly from Boston to Plymouth, before bumping into Cape Cod. The coastal communities in this area are upscale and full of colonial era homes. They are picturesque, with snug harbors and pretty beaches.

Plymouth, at the southern end of the South Shore, is of course, a historic town known for the fledgling community of separatists that fled England in search of religious freedom, establishing a foothold for the larger settlement of New England. With multiple historic sites and an intimate and thriving downtown of shops, restaurants, and art and music venues, it’s a place worth visiting even beyond its historic draw.

Rural Carver, to the west of Plymouth, draws visitors to King Richard’s Faire, a renaissance fair held every year in early fall, and also to Edaville, a unique theme park beloved by families that started as a working narrow gauge railroad around the cranberry bogs of a Carver plantation.

The South Coast has a different character. The ragged coastline runs along Buzzards Bay from Wareham to Westport, with the scenery changing from charming little coastal villages like Marion and Mattapoisett to the whaling city of New Bedford and on through the lovely farmlands of Dartmouth and Westport. There are plenty of worthy beaches in between, the most notable being Horseneck Beach in Westport.

Further inland are many rural and exurban communities, along with a few minor cities. Taunton, known as the “Silver City”, was once a center for production of fine silver goods in the early 19th century. Brockton, was once a major producer of shoes. These are now mostly known as suburbs of Boston.

This region is my home base, here in Plymouth. Discover (or re-discover) it with me.

Places in the region 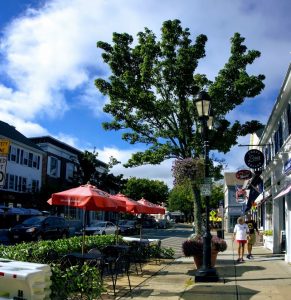 Plymouth – where New England began. Well, not exactly. The natives were here long before the English, and later there was fur trading up north and